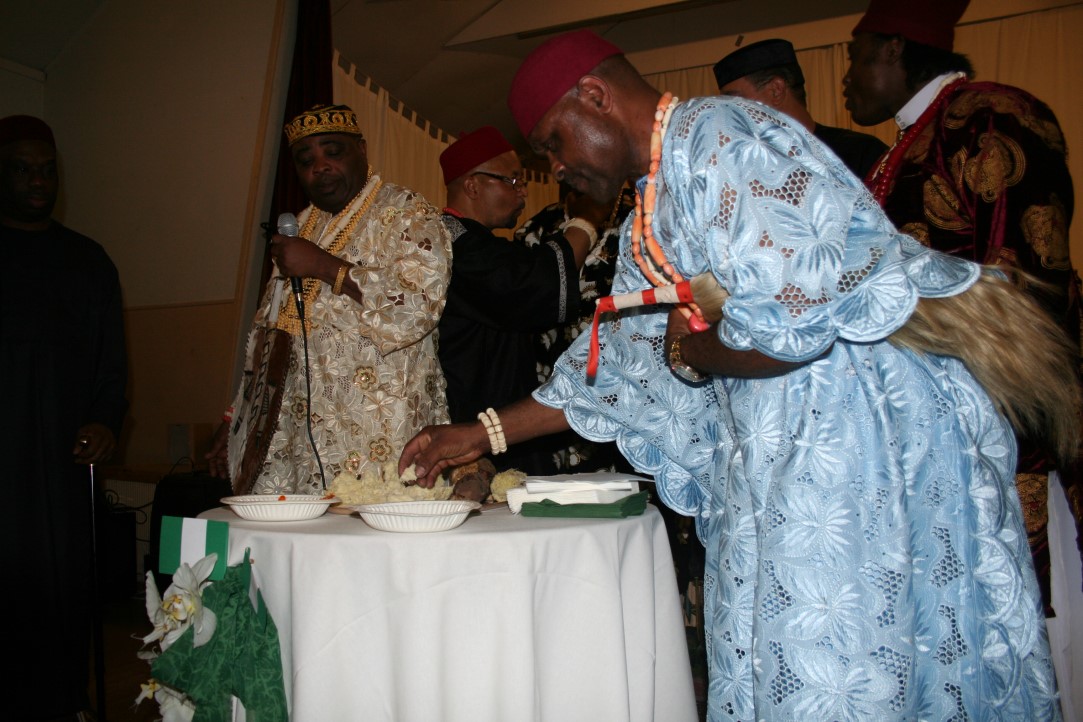 The pomp and pageantry that attended the recent Igbo New Yam festival spoke eloquently of the people’s rich cultural heritage. The occasion, which was held at the Astoria-Sali main hall in Iso Roobertinkatu 14, Helsinki, Finland, was packaged by the Igbo Union Finland as a sophisticated cultural extravaganza, with delegates from almost all the Igbo associations in Europe and the Scandinavian region, namely Sweden, Holland, Italy, Denmark, Norway, and, of course, other African state representatives were there, including the Ashanti from Ghana, Kenyan, Senegal, Cameroon and all the Igbo union members.

The latter is a nascent umbrella body for all Igbo indigenes, resident in Helsinki. According to Nze Emeka Nwosu, the chairman of Igbo Union Finland, it aims “to strengthen the bond of relationship that existed between (the Igbos) in the Diaspora.”

In Igboland, the occasion of Iri-ji (new-yam eating) is a cultural festival because of its significance. The individual communities, as agrarian people, have their days for this august occasion, during which an assortment of festivities marks the eating of new yam. To the Igbos, therefore, the day is symbolic of enjoyment after the cultivation season. Igwe C.I.C Nwangwu (Eze ndi igbo na Holland), the star guest at the occasion, captured its importance vividly when he described the new yam festival, in our tradition, as the culmination of a work cycle and the beginning of another.”

That perhaps explains why in a traditional Igbo setting, an invitation to the festival is usually thrown open. What this means, according to Dr. Godwin Ikegwuonu, the chairman of the occasion, is that there is abundant food for not just the harvesters but friends and well-wishers alike to enjoy.

The ceremony at the Astoria-Sali is apparently meant to replicate the new yam festival in its indigenous setting. Interestingly, it was advertised for the first time to all Igbos associations in Europe and the Nordic region, including Sweden, Norway, Denmark, Germany, London, Italy, Holland, Spain and Austria. The attempt was not in futility, judging by the carnival nature of the event.

In Igbo communities, the solemn role of eating the first yam is performed by the oldest man in the community or the king, as the case may be. The belief is that their position bestows on them the privilege of being intermediaries between their communities and the gods of the land. The rituals that attend the new yam eating are meant to express the community’s appreciation to the gods for making the harvest of farm yields possible. The influence of Christianity notwithstanding, many traditionalists and titleholders in some Igbo communities never taste the new yam until the day traditionally set aside for it.

At the new yam festival, varieties of Igbo delicacies including Jollof rice, Goat meat, Nsala soup, Grilled gizzard, Egwusi soup, snacks, Assorted drinks and of course dishes of yam are served since the festival is symbolic of the abundance of the yam produce. As one observer pleasantly put it, apparently, he was mesmerized by the gorgeous and rich African delicacies at the event. There appeared to be yam enough only for the ritual by Igwe C.I.C Nwangwu, as “the father of the day,” Nze Emeka Nwosu, Mazi John Enwerem, Mr. Mekus Anochiam, Chairman Nzuko Ndi Igbo na Stockholm, and Dr. Ikegwonu, the chairman, who chaired the occasion, and a few members of the high-table.

For those at the occasion who were not of Igbo origin that attended the event even among the Igbo’s present, the big Surprises were the vibrant cultural dances, the fashion show, Igbo children’s cultural display and the displays and the appearance of Igbo ancestral masks, which succeeded in capturing the festive mood that has become synonymous with the iri-ji in traditional Igbo societies and many of other activities.

The event which ended around 10:pm was considered a huge success by all the attendees. As one observer noted he enjoyed the event and hope to come again in the coming years. The Igbo Union Finland, the principal host of the event promised to make it even more splendid in the coming years. Click to View more event Pictures